The Arena of Verona: twenty centuries of history 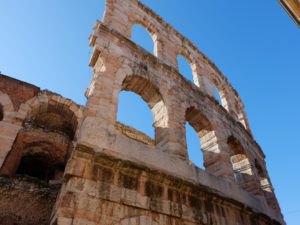 Amphitheatre is the name, but it’s better known as the Arena of Verona. Erected in the first half of the century A.D. outside the city walls it could accommodate about 30,000 spectators; more than 20.000 people reached Verona when gladiators fights were organized in summer time. From the Middle Ages onwards tournaments were held in the amphitheater of Verona, rides, carousels, sporting events, theater performances, etc. …

Originally, the elliptical building, was equipped with four rings and three galleries. The outer ring or the fassade was completely out of stone. The outward appearance of the Amphitheatre is different today from the ancient aspect since almost all the external ring, which was the real facade, has collapsed. As a resault only a small part of the facade has survived after the earthquake of the year 1117.

To have an idea of the original appearance of the external wall it’s sufficient to look at the so called “Ala” , the well preserved part of the facade with five pilasters and four interposed arches. 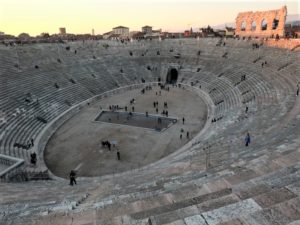 The capacity of the Arena is therefore reduced to 22,000 spectators. In addition to the auditorium, podium, arena and vomitoria, which are parts of great archaeological interest, most noteworthy is the visit to the ambulatory, arches and corridors.

Since 1913 the Arena is the seat of a prestigious opera season in the months of July, August and sometimes September; every summer are performed about fifty operas.

The guided tour of the Arena lasts one hour.